The U.S. Navy SEALS are known for their prowess in combat so it’s natural that they would set a standard for hand-to-hand weapons in the industry. U.S. military fighting knives should be of the highest quality to ensure soldiers are well protected and are not compromised by sub-par tools.

If a brand offers U.S. military fighting knives for sale, you can bet there will be a huge interest from knife enthusiasts and people who need a good knife for things like hunting and fishing. 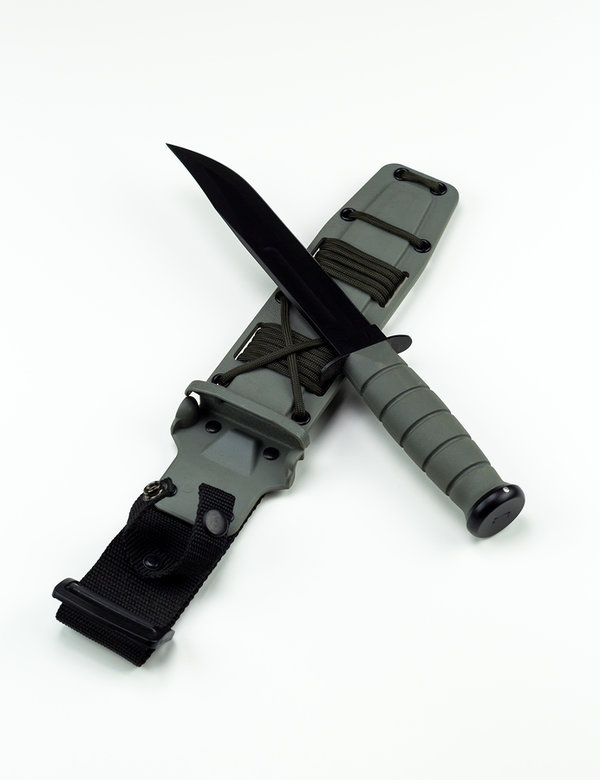 Long a favorite amongst the Marines, the Ka-Bar gained popularity in World War II when it became apparent that soldiers needed more than just a simple combat knife. Since the company, originally Union Cutlery Co, started in 1898, their knives have been used in every major U.S. military engagement.

There is a large loyal following in the military for this knife as it has so many functions as well as close quarter combat. Whether it’s a soldier’s last defense, or being used to open a c-ration, this knife is sturdy, durable, and reliable, much like the soldiers who use it. The design is simple, a long straight knife with a stainless-steel blade of 7 inches and a leather handle and sheath.

The size and strength of the knife allows it to be used in a number of practical situations which makes it a good choice for you to take with you on a trip into the wilderness, as well as for use around the home. It has become an iconic image recognized by the American public. Even the famous photo of soldiers planting the American flag in Iwo Jima. It has almost a cult status as a weapon and is certainly easy to identify.

Though the Ka-Bar remains one of the most popular knives for soldiers, it has some competition now. There is a range of other knives that are both standard issue, or the personal knife of choice for U.S. military troops.

One of the most popular is the Ontario MK 3 Navy Knife, the standard issue for the U.S. Navy SEALS. With a sleek black 6inch blade, part of which is serrated, and molded plastic handle, it is a comfortable, multi-purpose knife.

The SOG SEAL Team Elite knife is another popular choice amongst military men, with serration on both edges of the knife, and the blunt end of the blade extending a bit past the bottom of the handle to allow you to use it to break glass. It also comes in a shorter version, the SEAL Pup, with a blade of 4.75 inches. There is also no doubt that some of the knives used today will continue to be used by members of the U.S. Navy for many years to come.

Cabo Yachts For Sale in California

Common Reasons Planning Your Home Remodel and Estimating the Budget Are Required in York, PA

Cabo Yachts For Sale in California